How to beat ChromeOS EOL and carry on getting updates

April 21, 2018
ChromeOS devices are great in loads of ways, but they have built-in obsolescence. Google will stop providing updates at a predetermined time according to the schedule you can find here. So the best you will achieve is 6.5 year if you buy the device on the launch day. In reality, it will be generally much less. It's something to watch as a good deal might not be such a good deal if the device only has two years left.

Once a device reaches its "due" date, you get a red pop up telling you its time to update every time you log in. The update section tells you there are no more updates. Now the device will work fine - for a while. You might get another 6 months use out of it before core services like Gmail stop working. However, if you are prepared to do a little work, you can install the OS of your choice onto the device and carry on using the device and not accept this. If you want ChromeOS, then you can install Cloudready from Neverware. I'll outline the basic steps below:

If your device was managed - then make sure it is in an OU with forced re-enrollment turned off while you tinker.

We are going to modify the BIOS on the machine. Some machines have a hardware lock on this. It may be a screw or a jumper on the motherboard. You need to find out where this is (if present). Chromium.org has guides for some devices - Samsung Chromebox and 550. So for the Samsung Chromebox the jumper indicated in the picture must be closed:

Once you have flashed your BIOS you can open this again.

Fire the machine up and login to it. Open up Chrome and hit Ctrl + Alt + T. This will bring up the terminal. Run the following commands:

Reboot the device and log back in.
Open up the terminal again Ctrl + Alt + T. The run the following commands:

There is an alternative Sea BIOS source and the script would be:
cd; curl -LO https://mrchromebox.tech/firmware-util.sh && sudo bash firmware-util.sh

The second one comes from MrChromebox.tech - the site gives lots of good information.

You are now at the point of no return and can potentially brick your device. Follow the onscreen instructions to the letter. With the bios flash option FULL ROM should work with most devices - but check your one here (or at MrChromebox.tech if using that BIOS).
Assuming you get no errors, you can reboot the device. ChromeOS has now gone!

You need a bootable USB stick with your new OS on it. Could be Windows, Linux or Cloudready to go back to ChromeOS. Pop it into a USB port before you reboot.

Reboot. Hold ESC down and hammer the "2" key. ESC selects the boot option and 2 is USB boot. If all is well, you should boot from the USB key and be able to install the OS. Once it is all working, I suggest you re-enable the BIOS lock.

This allows you to carry on using the device indefinitely. There are a few things to be aware of:


Over the coming year, I'll be doing this on numerous Asus, Acer and Samsung Chromeboxes and LG Chromebases. All work absolutely fine - but are coming to the EOL date so there is is no need to accept planned obsolescence.

Just an update on this - the location of the hardware lock for Asus/Dell/HP and Acer (under the heat pipe) hardware locks are shown below: 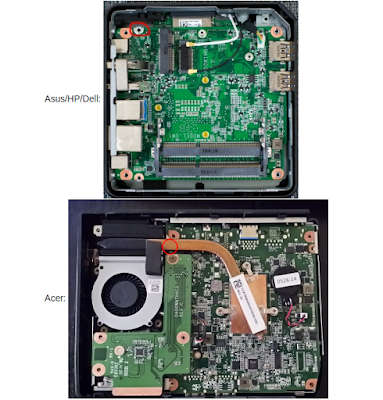 Popular posts from this blog

My favorite GAM commands - well a few of them at least!

October 08, 2017
Where would be without GAM? Paying for expensive syncing tools or doing tedious manual tasks in the admin console. GAM can automate most things you might want to do in G Suite. So these are a few of my favourite commands - one I use either as part of a batch file - or just standalone. There are loads more - but these are ones that are used daily. Classroom Create a spreadsheet of all your domains classes -  gam print courses todrive Create a spreadsheet of a teacher's classes:  gam print courses teacher fred@mydomain.com todrive Bulk create classes: gam csv classes.csv gam create course alias ~alias name ~alias section ~subject teacher ~teacher status ACTIVE where classes.csv is a list of classes you want to make. Add teachers: gam csv teachers.csv gam course ~alias add teacher ~teacher Add students: gam csv students.csv gam course ~alias add teacher ~student Sync Students (in this example to a group - but could be an ou/csv file) gam csv groups.csv gam course ~g
Post a Comment
Read more

June 21, 2016
If a user send an inappropriate email to a loads of people or get stung by some sort of email exploit you can quickly delete the email from all of the recipients using a GAM command. Step 1 - get the email header Go into Google Vault and search for the offending user or someone known to have got the message. Click show details and grab the email ID. This will be a long string of characters followed by @mail.gmail.com Step 2 - find out who has the email Go into Google Vault and find the original message sent by the offending user. Look at the details to see who got it. Copy the list and dump it into a spreadsheet. Clean up to just a list of emails with a column header 'mail'. Save as a csv file. Step 3 - delete messages with GAM Put your CSV file in your GAM folder - this e.g. assumes its called mail.csv Run: gam csv mail.csv gam user ~mail delete messages query rfc822msgid: MESSAGEIDHERE doit The alternative nuke option is: gam all users delete messages query rf
Post a Comment
Read more

July 20, 2017
This is a guide (or documentation for my own use!) to the provisioning of Google Classrooms across a large domain and how to achieve ongoing sync of student members. The advantages of doing this are: Teachers don't have to do anything - all their classes are just there. You can add multiple teachers to classrooms. No inviting a secondary teacher. Students have all their classes at the start of the term. Students are automatically in the correct classes. Classes have totally consistent names. You can do it for FREE - however, there are paid for options if you don't want to go the DIY approach. The following requires you to have the student, staff and optionally, guardian emails on SIMS. Step 1 - Setup up GAM - you need this to do command line processing on your domain. It's a very powerful tool to do batch commands. Step 2 - Export a list of current Classrooms and archive any you don't want. I'd recommend this as it means users will only see the ones
2 comments
Read more